Last weekend I popped my 50-mile ultra marathon cherry when I took part in the South Downs Way 50 (SDW50). The result wasn’t what I wanted, but the race was a great, humbling experience and I gained much from it.

So, here’s how I got on, my observations, recommendations, and why I’m not disappointed that things didn’t go to plan.

The SDW50 is a Centurion Running event that’s a point-to-point trail race along the (you guessed it) South Downs Way.

The race begins near Worthing College and heads north for the first 10km before reaching the South Downs Way. Runners then head east and stay on it all the way to Eastbourne, where the race finishes with a lap around a 400m track.

The cut-off time is a reasonable 13 hours and as it’s a Centurion event, you’re given great support from start to finish, with five well-stocked and well-manned aid stations along the way.

The course is also well signposted and I didn’t need to use my watch for directions. That said, some frontrunners missed one of the early markers and took a three-mile shortcut before being hit with a time penalty, so…

I’ll go into detail about my training for the SDW50 in a future post. I’ve already posted some updates along the way, but in short, training was inconsistent and hampered by issues. Then again, who has the perfect training block?

And with the excuses out of the way; let’s move on to the race.

I set my alarm for 05:30, which was optimistic as I was awake hours before due to nervous energy and being in the most uncomfortable bed in Britain. So here’s my first piece of advice: never stay in a Travelodge.

A bagel, some porridge and a can of Red Bull soon perked me up and I was off to Worthing College to register and collect my bib number.

Centurion used to do kit checks before handing out numbers, but they now do random spot checks at aid stations instead. This makes registration quicker, but don’t see this as an opportunity to skimp on the mandatory items to cut down on weight. The kit list’s there to keep you safe and potentially save your life.

After attaching my race number to my shorts – always a tricky task – and visiting the toilet for the 327th time, we were coaxed across the road to the nearby recreation ground for the pre-race briefing. And then, at the stroke of 08:30, the horn sounds and we’re off.

If any racing snakes are reading this, then start near the front. The initial section is on single track footpaths making overtaking tricky. For everyone else, see the queues as doing us a favour by reigning us back during the excitable opening miles.

My aim for the race was to finish as close to nine hours as possible, meaning an average pace of 6:40 min/km.

To make this easier, I used Garmin’s PacePro feature to keep me on track with its grade adjusted guidance. Obviously my pace would vary through the day, which is why I like PacePro as it stops me from worrying or from going too hard on the hills. It also allows me break the race down into manageable, bite-size chunks.

I covered the first 10km, on the uphill approach to the South Downs Way, in a little under 70 minutes. Bang on target for my sub-nine goal at this early stage, with the plan being to gain time on the downhills.

I was a little overcautious up until the first aid station at Botolphs as I adapted to the trails. They’re not technical, but they are tough underfoot, consisting of hard chalk and hiding some potentially cumbersome stones.

Choosing my beloved Hoka Speedgoats proved to be a good decision. Even with their chunky cushioning, my feet were sometimes sore due to the pounding and I often strayed to grassy sections for respite.

You can easily run the SDW50 in road shoes, so long as it’s not been raining in the days before. I would, however, still recommend a non-aggressive trail shoe like a Speedgoat for that extra bit of grip.

The Botolphs aid station is at 18km and I got there in two hours, so still within my nine-hour goal. With regards to nutrition, my main source was Tailwind, at two scoops per 500ml, every hour. So I was now in need of a top up.

I’d heard the Tailwind at Centurion’s aid stations is quite diluted (roughly one scoop), so I packed my own supplies for the race. With the second aid station just 9km away, I only needed one bottle filling – no point carrying unnecessary weight – so I decided to try their Tailwind mix. And yep, it’s weak and probably wouldn’t be enough to sustain you as an only source of fuel.

Another thing about the aid stations in the SDW50 is that they’re typically at the bottom of a big climb. My advice would be to grab what you need from them, then eat as you walk up the hills.

Out of Botolphs, there’s an extremely long climb up Truleigh Hill. Then it’s on to Devil’s Dyke, before a much-welcome descent down into Saddlescombe Farm for the second aid station.

Almost 27km in by now and both body and mind were feeling fine. Knowing the next section to Housedean Farm was one of the longest (16km), I topped up both bottles with my own Tailwind and promptly headed back out, now ahead of schedule by 20 minutes.

Things were looking good and even better, this particular part of the course is largely runnable without many nasty hills. Everything’s going great! I’m going to hit my target if I can keep this u…

And then, as I pulled into the Housedean aid station at just over the halfway mark (43km), I felt an ache in my left hip flexor. Nothing to warrant concern at this point, so I grabbed some gels, filled the bottles, then started clambering up one of the worst climbs of the day.

I’ve no idea if this horseshoe-like hill has a name or not, but what I do know is that it was horrible. I was in no mood for it nor the headwind that came from nowhere. Conditions had been perfect up until this point and now I was shivering, not helped by my pace slowing considerably.

It seemed to take forever to reach the summit, and little did I know that the long hike was masking the issue that was developing in my hip.

It was finally time to wake the legs up for some downhill action towards Southease. This coincided with my hip ache turning into waves of pain, but only on the descents. That’s fine, I could cope with that. No need to enable damage limitation mode just yet.

Out of Southease aid station was – you guessed it – another massive climb. I tried to run-walk it, which was futile as my hip was now hurting on the uphills as well. There was no option other than to hike it at a snail’s pace. I was watching my estimated finish time slip away as I made it up to Firle Beacon, but a sub-10 hour was still doable. Just.

Fortunately, up on top, it’s about as level as it gets along the South Downs Way. So, using runner’s logic, I thought if it hurts to run up and downhill, then let’s try running on a flat(ish) surface. And would you look at that: almost no issues whatsoever. The only problem was that the final 16km features some of the steepest hills on the SDW50.

I frustratingly plodded down what would’ve been a cracking descent to the penultimate aid station at Alfristion (67km). It was here that I finally accepted that I was probably going to have to walk to the finish.

And that, dear reader, is what happened. Up past the Long Man of Wilmington, wondering if the misery was ever going to end, followed by a wince-inducing decline into Jevington – there’s an often neglected aid station here as people just want to crack on – and then up the final hill, to the infamous trig point.

I’ve never been so happy to see a concrete pillar before. I did consider kissing it, then recognised that was a bit odd, so continued shuffling, knowing there was only a parkrun to go. Only problem was, I now had to venture down the infamous ‘Gully of Doom’.

Just to make it more interesting, there was also a tree down thanks to Storm Eunice. If I wasn’t moving slow before, then I definitely was now – at a glacial pace of 16:00 min/km!!!

The good thing about being so tardy, however, is that it reduced my chances of stumbling. I saw a couple land on their backsides, but thankfully no harm was done and they laughed it off. And a tip for future me: take the right-hand trail when it splits as this seems to be the easier option.

After what felt like eternity – I’m sure stars had formed in the time it took me to reach the bottom – I finally hit the hallowed streets of Eastbourne. Would I be able to run after nearly three hours of walking? Could I even remember how to run?

Well, the running gods took pity on me as the pain levels decreased and I somehow ran the last 2-3km, with an average pace of 6:30 min/km. Yeah, not staggeringly fast, but I felt like Sonic the Hedgehog after spending so long going so slow.

I arrived at Eastbourne Sports Park just as the sun was setting, with only a lap of the track to go. Around I went, speeding up like it somehow mattered, to cross the finish in 10:45:12. Well below my target, but the result was irrelevant – I did the best I could in the situation I was given.

Ultra marathons are painful, which is an obvious statement to make, but there are various levels of suffering. Looking back, I sometimes question if I lacked the ability to persevere with my hip problem. Was it that bad? Then I remember the moments where I was sucking my teeth in absolute agony.

I don’t believe in the “die before DNF” mentality and see no shame in tapping out, but only if it’s absolutely necessary. So while my SDW50 fell apart, there was no reason to quit as I could still walk with mild discomfort. It also meant I got my money’s worth out of the entry fee by taking so long.

But in all seriousness, I surprised myself with my tenacity and stubbornness last weekend, and it reaffirmed my decision to go down the ultra route with my running.

Ultras are like a metaphor for life and remind you to always continue moving forward, no matter what. I’ve no doubt this race has made me a stronger and better person, as well as a better runner.

Another reason why I like them so much is the community. The support and camaraderie out on the course was fantastic and mirrored that of a family. It’s also easy to see why Centurion has a cult-like following, because as a race organiser, they are among the best and their volunteers are a real asset.

My next big race is Centurion’s Chiltern Wonderland 50 in September and I’m looking forward to it already. Not least because I set the bar so low in the SDW50 that a PB is a foregone conclusion. Surely?!? 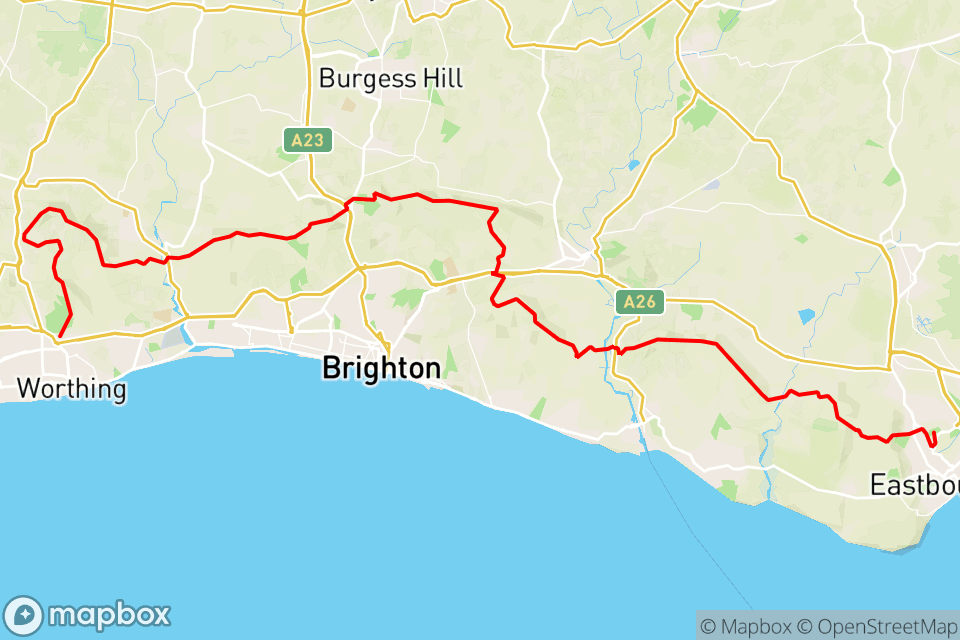 Hip issue made the hills unpleasant in the second half, so had to walk most of the last miles. Still thoroughly enjoyed the race and the camaraderie.

Looking back on training for my second 50-miler

You should be following – Vlad Ixel